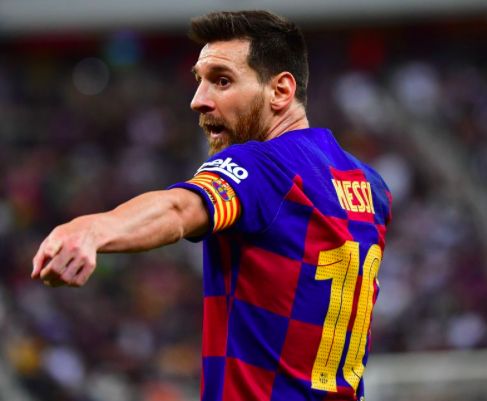 Depending on how much you had to drink last night you may or may not believe the reports of Barcelona legend Lionel Messi leaving Barcelona for free next year and Manchester United being a possible suitor for the Argentinian.

Unfortunately, I wouldn’t hold your breath on this one.

Recently Messi and Barca sporting director Eric Abidal had a rather public spat and since then, rumours and speculation have swirled that Messi could leave in the summer because of a clause in his contract and frustration at Barca.

The disagreement with Abidal began when the director of football accused the players of not working hard enough. Something that didn’t sit well with the ultra-competitive Messi.

In an interview with Spanish outlet Sport, Abidal had claimed ‘a lot of players were not happy and did not work much’ under former boss Ernesto Valverde, who was sacked and replaced by Quique Setien last month

Messi who rarely airs team matters in public, hit back and suggested the Frenchman and his former teammate, along with the Barca board should stick to off-field matters.

“I honestly do not like to do this kind of thing but I think that everyone has to be responsible for their job and take responsibility for their decisions,” the Argentine wrote on Instagram.

Messi has a clause in his contract that allows him to leave at the end of the season – and for free, and La Gazzetta dello Sport claim that only a select few clubs would have any hope of prizing him away from the Catalan giants.

Manchester United, Manchester City, Paris Saint-Germain, Juventus, and Inter are all specifically mentioned as ‘possible buyers’, as ultimately they could have the finances and the appeal to convince Messi to start a new challenge elsewhere.

Although this would be incredible for United, please read my statement from the second paragraph …. do not hold your breath on this one.

Unlike United, Barca isn’t getting rid of their star player and given what Messi achieved with Barca and how settled he has been with the reigning La Liga giants for countless years, an exit is surely unlikely.

Messi wants to win trophies and even though Barcelona is in “turmoil”, there is no better place for him to do that.

Barcelona have won six major domestic honors, including back-to-back La Liga titles, not bad for a team in turmoil.

Yes, Messi is in the twilight of his career but year in and year out Barcelona win and the “journeyman” role or trophy hunter doesn’t fit when talking about Messi.

Unlike other professional teams in the NBA, NFL or MLB, it isn’t easy to build a winning team with a few trades and transfers in a season with top-level European football teams. Although Barcelona seem to have fallen victim to the same injury-plagued season as United, they are still winning and are as dominant as ever.

Seeing Messi in another jersey just wouldn’t seem right and Messi has said over and over again that he wants to stay at Barcelona. “If they want me, I would obviously be delighted to remain at Barca,” he told RAC1. “I reiterate that my aim has always been to stay here.

“Nothing has changed; it is as it has always been. Each time it becomes clearer that my aim and that of my family is to finish here.”

Coming off all the speculation associated with the January transfer window, this two-week winter break is just a continuation of the rumour mill. As much as I would love to see Messi in a United jersey, I’m not holding my breath.