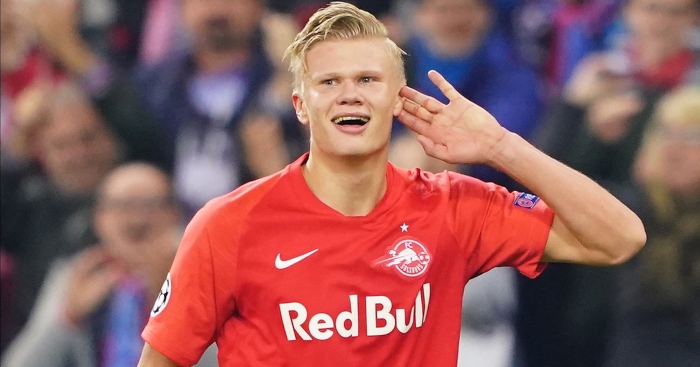 An interesting report from Norwegian news site VG claimed that Manchester United manager Ole Gunnar Solskjær meet with Salzburg striker Erling Braut Haaland and his father on Friday in an Alpine village outside of Salzburg.

Solskjaer was confirmed as absent from United’s Friday training session. A photo agency, PA Photos, was outside United’s Carrington practice facility and noted that Solskjaer wasn’t in any of the 17 player and staff pictures taken as they entered the building.
When VG asked Haaland’s father Alfie about the rumored meetup, he replied “I hope you understand that I can’t comment on all the rumors going on now,” then added he that was headed to Bryne Friday night to watch the “Norwegian Talents” show with his children.
Erling Haaland has commented before on his relationship with Solskjaer, “He has played a very big role for me. The way he was with me, how he trained me and what he taught me … It has a very big impact on me being who I am today.”
It has been speculated that United are favorites in the battle for Haaland’s signature even after his recent trips to visit Borussia Dortmund and RB Leipzig this week.
In a press conference on Friday, it was announced that Haaland will not be traveling to RB Salzburg’s last match of the calendar year this weekend against Hartberg, adding to the speculation that he is on the verge of agreeing a move away from the club in January.
Link to article:
https://thebusbybabe.sbnation.com/platform/amp/2019/12/14/21021700/ole-gunnar-solskjaer-salzburg-erling-braut-haaland-reports-manchester-united-transfer-rumor?utm_campaign=thebusbybabe.sbnation&utm_content=entry&utm_medium=social&utm_source=twitter&__twitter_impression=true