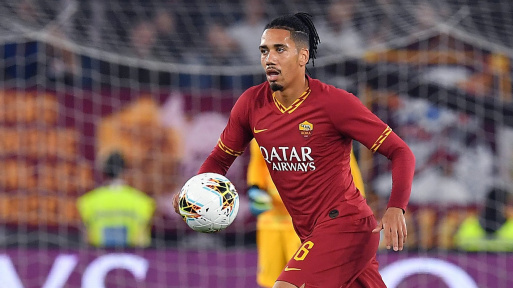 There are conflicting reports on Chris Smalling’s future once his Roma loan expires this summer.
A report from today’s Daily Mail stated that Roma is working on a permanent deal to keep Smalling in the Italian capital full time. Although out of action until January due to a knee injury, Smalling has resurrected his career at Roma and Roma manager Morgan De Sanctis has confirmed the club are looking into options to sign him permanently.
Earlier, in the week, the Sun reported that Ole Gunnar Solskjaer was pretty adamant that Smalling would be returning in the summer when his deal ended. When asked in a press conference before the City match if Smalling would be coming back, Ole simply answered “yeah.”
Smalling was the odd man out this season when Harry Maguire was signed and Axel Tuanzebe returned from his Aston Villa loan, and Smalling consequently was loaned to Roma for £2.71m. But Solskjaer has been impressed with how the center-back has handled the switch, hoping it has revived his career.
Solskjaer wasn’t the only manager to notice Smalling’s resurgence, either. England manager Gareth Southgate recently traveled to Italy when Roma played Inter Milan last week to watch Smalling who has 31 caps for the national side but hasn’t made an appearance since 2017.
No Interest in Takumi Minamino Though
Multiple sources suggested that the RB Salzburg winger Takumi Minamino is in negations with Liverpool for a £7.25million January switch, with the league leaders having seen off interest from other teams.
One team that isn’t interested is Manchester United. MEN have reported that despite earlier reports, United are not interested in the 24-year-old winger but rather extremely interested in Minamino’s teammate Erling Haaland. As reported earlier, United head of scouting Marcel Bout traveled to RB Salzburg Champions league match against Liverpool to scout Haaland again.