It took me almost 20 years but I finally got to Manchester to see my first ever match. What an incredible match for my first game. We beat Brighton and Hove Albion 3-1 on 11/10/19. 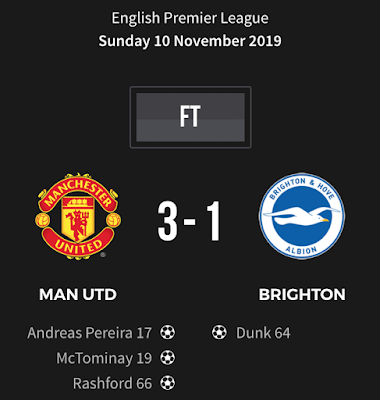 Manchester United grabbed three Old Trafford goals for the second time in the space of 72 hours, to climb the Premier League table with a comfortable 3-0 win against Brighton.
Two goals in the first half and one in the second replicated the demolition of Partizan Belgrade in the Europa League last Thursday night.
Andreas Pereira’s opener and an own goal from Brighton’s Davy Propper once more made it a comfortable watch for United fans as Ole Gunnar Solskjaer’s men dominated the first half.
Lewis Dunk wrecked the clean-sheet target when he pulled a goal back for the visitors after the break but it failed to derail the Reds, who immediately gained a grip back on the game when Marcus Rashford thundered in a belter two minutes after the Brighton response.
United moved into seventh spot in the table with this first Premier League win at Old Trafford since beating Leicester City in September.
Following on from the confidence-boosting 3-0 win against Partizan Belgrade, United fed off the feelgood factor to race into an impressive early lead at Old Trafford. Brighton had been getting a good press this season under Graham Potter and started the match ahead of the Reds in the division.
But United soon put a stamp on this match and after Marcus Rashford had softened up the Seagulls’ defence with a marauding, penetrative run and shot, the Reds took the lead in the 17th minute.
Breaking fast, United had Brighton back-pedalling with Andreas Pereira confusing the rearguard with a series of stepovers.
The midfielder fed Anthony Martial and with the stadium, and probably the Brighton defence, expecting a trademark curling shot, he confused everyone and laid the ball back to Andreas. His sweeping left-footed shot took a decisive deflection off Dale Stephens to wrong -foot keeper Mathew Ryan.
United were buoyant and Brighton were getting desperate in their efforts to stop them as they picked up a series of yellow cards.
After 19 minutes, a goalmouth scramble and the intervention of VAR meant a wait inside Old Trafford before it was confirmed United had taken a two-goal lead.
It began with a Fred free-kick which Harry Maguire made contact with and Scott McTominay forced his way onto the loose ball in the six-yard area and looked to have had the final touch.
VAR checked for what appeared to be a potential handball from Maguire but as the United fans began to lose their patience with the ‘checking goal’ signs, the goal was finally given.
Meanwhile, TV replays showed that it was Brighton’s Davy Propper who’d actually toepoked the ball over the line.
The Seagulls did have a couple of chances to test United but generally, it was all about the Reds in the first half.
Unlike against Partizan, United couldn’t get back into a full attacking stride at the start of the second half, with only a long-range shot from Andreas, that was easily saved, to write about before the hour mark.
The Reds’ slightly lackluster start after the interval was punished by Brighton when Lewis Dunk pulled one back for the visitors. Brighton’s captain met a 64th-minute corner with an unchallenged header in front of the Stretford End.
The Unted manager won’t have been pleased with the simplicity of the concession but at least it sparked his side back into life. The Seagulls had only two minutes to consider a real comeback before they were two goals behind again.
A fabulous pass from Fred to Martial opened Brighton up but a late stab from defender Shane Duffy took the ball off the striker’s toes.
However, the Frenchman reacted and retrieved possession to feed Rashford, who hammered a shot into the roof of the net for the Reds’ spectacular finish in the 66th minute. 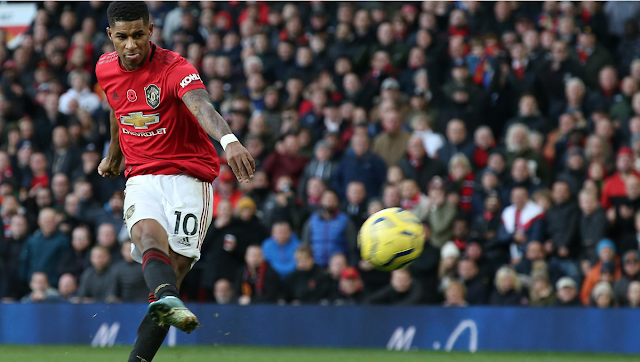 However, the Reds’ no.10 was cursing himself two minutes later when he missed a sitter. Daniel James had raced away on the right to set up the Mancunian but from inside the six-yard area, Rashford managed to steer the ball wide.
Undeterred, United kept up the renewed high tempo and Brighton were being savaged.
Brandon Williams almost marked his first Premier League start with a goal but keeper Ryan denied him and then the Brighton number one also kept out an effort from James as the on-fire Reds went looking for additions to the scoreline.
Rashford again went close to scoring his second late on but even without that, the United fans left Old Trafford with another exciting triumph to savour.
MATCH DETAILS
United: De Gea; Aaron Wan-Bissaka, Lindelof (Lingard 70), Maguire (c), Williams (Rojo 90); McTominay, Fred; James, Andreas, Rashford (Greenwood 90); Martial.
Subs not used: Romero, Jones, Mata, Garner.
Goals: Andreas 17, Propper own goal 20, Rashford 66.
Bookings: Rashford, Williams.
Brighton: Ryan, Montoya (March 45), Dunk, Duffy, Burn, Propper, Stephens, Alzate, Trossard (Gross 59), Maupay, Connolly (Murray 45).
Subs not used: Button, Balogun, Mooy, Schelotto.
Goals: Dunk 64.
Bookings: Stephens, Dunk, Montoya, Burn, Propper.
Attendance: 73,556
53.4630589-2.2913401